After a two-year hiatus, Coast to Kosciuszko returned for 2020. Borders were open, enabling 49 of the maximum 50 runners to be on the start line at Boydtown Beach just south of Eden, NSW in early December. A didgeridoo echoing across the bay at dawn and a Welcome To Country explaining the traditional trading paths from Eden to the high country set the scene for a special race.

Runners had a beautiful morning through the bushfire scarred hinterland before reaching the lush Towamba Valley. Vlad Shatrov was the early leader, setting a fast pace in seeking to better Andrew Tuckey’s race record. Runners met Big Jack Mountain then enjoyed the flatter terrain through Cathcart. As the day unfolded, the temperature would increase.

Although Coast To Kosciuszko has had hotter days, the decent wind, little shade or protection and the amount of downhill that many forget about started to take its toll.

One withdrawal became two, then three, then more including seasoned campaigners such as Jo Blake, Kevin Muller and Sabina Hamaty. By dawn the next day the number of withdrawals hit double digits. Those withdrawing had over 130 Coast To Kosciuszko finishes between them, so inexperience couldn’t be a factor.

While all runners toiled away on the course there were fascinating duels up front. Vlad Shatrov led Morgan Lindqvist by as little as 400m and by as much as 2km. All day. Kay Bretz was only a couple of km further back with Grant Brisbin and Nicholas Bamford keeping up the pressure. Amy Lamprecht led Joasia Zakrzewski by similar margins with Lou Clifton a little further back. All day.

All runners longed for and welcomed the cooler temperatures of the night on the Monaro Plains and into Jindabyne. The runners got to experience an amazing sky with the most stars you’ll ever see. The leading men maintained the pace and positions, while Joasia got past Amy before the 148km mark at Dalgety.

The weather held while the forecast indicated increasing winds across the morning and rain for the afternoon of Day 2.

Vlad Shatrov continued to lead and looked strong on the climb to Perisher in the early hours of the morning but eventually succumbed and withdrew just before the Perisher Valley checkpoint at 219km. Morgan Lindqvist kept the pace and was able to power on to Charlotte Pass, summit Mount Kosciuszko before crossing the finish line to win just after 8am in 26:35:49. Grant Brisbin overtook Kay Bretz on the climb to Perisher, and was strong on the summit, finishing only 34mins behind Morgan in 27:09:45. Joasia Zakrzewski had a near perfect run, finishing in third place outright, and being the first placed woman in 28:18:53 – smashing the women’s record by almost 2 hours.

In fact Joasia, Amy and Lou as top six placegetters and the first three women overall, all beat the previous women’s record.

The winds continued to increase with gusts of up to 80km/h with sideways driving rain as the last runner to finish, David Bennie crossed the finish line just prior to 10pm. David had a very special finish with course ambulance vehicles guiding David home, in a procession with sirens flashing, in the driving rain.

The 2020 Coast to Kosciuszko introduced a new generation of runners to this special event, with the first nine finishers all first timers. The conditions in the afternoon of Day One saw a number of multiple finishers withdraw as they struggled or niggles came back to bite. Yet the really tough weather conditions on Day Two saw no withdrawals. The runners at the back of the pack really toughed it out in massive winds and sideways rain – yet all crossed the finish line with beaming smiles and in their happy place, and few earned their Akubra and hat pin harder than the last runners home – Julie Sager, George Mihalakellis and David Bennie.

The 2020 Coast to Kosci had it all in a race that’s rarely predictable. From bushfire ravaged winding roads, white powdery dusty tracks, to lush rolling pastures, hot blue skies by day to the pink hues of dawn, the blackness of night with only stars to bare witness to the feet upon them, and a finale of threatening rolling grey clouds, unrelenting icy winds and wild sideways rain. We look forward to the first weekend of December in 2021 for the 13th Coast to Kosciuszko. 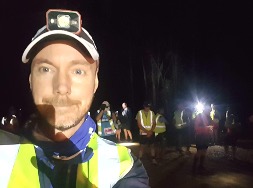 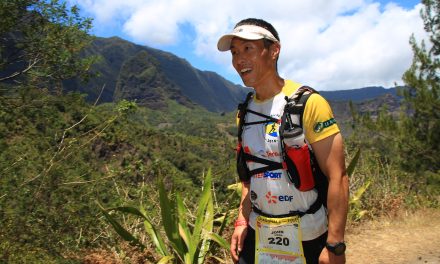