It’s been a busy couple of months for AURA and its membership.

I spoke on Tuesday night with David (team captain) about the event, and he had nothing but good things to say about the event organisation and the very tough course: at 88kms with 5000m of ascent, it didn’t look on paper like a tough one, but in his words, it was “brutal” and “technical as … !”

In the lead-up to the event, in addition to the event briefings, each national team received an individual briefing on drug testing, and was advised that the top male and female ranked runners would be tested (in our case, that was Lou and David). They were both required to give blood samples. David stated he was grateful to have undertaken the ASADA online training before attending the event because it gave him a solid understanding of both his and the tester’s responsibilities, and also resulted in him being a lot more informed about the risks inherent in using off-the-shelf supplements when it comes to drug testing. I would encourage all members to have a read of our announcement published back in February (2018) about anti-doping, and strongly recommend that everyone does the ASADA Level 1 & 2 courses, you’ll learn a lot.

You may have read our notice posted following the Australian Running Festival 50km event held in Canberra on 15 April (2018). As the AURA National Championship 50km race, AURA was asked for advice on how to manage results when a large number of participants were unfortunately directed the wrong way early in the race. While the three lead men went the right way, the lead female group and a large contingent of runners behind them ran up to an additional 6km. This not only impacted the outcome of the female championship results, but also meant that many other participants chasing qualification times for events such as Comrades were affected.

The outcome of the results and the reasoning is discussed in the notice. We fielded numerous calls and emails from participants expressing their disappointment at the race organisation. ARF organisers were extremely open in their communication with us both during and after the race, and sent us a very detailed response about what happened on the day including addressing a number of the concerns that we raised. They have committed to making a number of changes for future championship events, including:

In terms of the outcome of the AURA Championship, 1st place was jointly awarded to Larissa Tichon and Rachel Glasson, and third place to Alena Scurrah. A second 1st place trophy is being manufactured for Rachel. ARF agreed to award both Larissa and Rachel the 1st place prize money.

As to whether this event will be awarded the AURA Championships in future years, we will take everything that happened this year into consideration when making that decision.

Also, a reminder the selections for the 2018 World 100km Championships to be held on 8 September in Sveti Martin na Muri Croatia are currently open and will close on 11 June, the day after the Australian 100km Championships on the Gold Coast. The team will be announced on 18 June.

I’d like to acknowledge the results of the three AURA National Championship events held this to date year:

Many thanks to Dan Symonds for taking on the merchandise role. Shirts/Singlets/Buffs & Caps are now with Dan (located in Brisbane). You can purchase any of these items through the AURA shop. 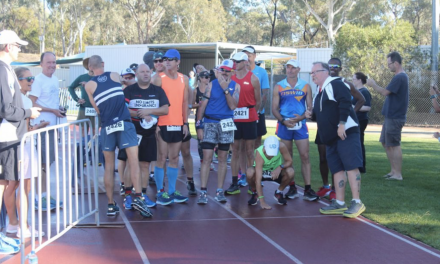